The Case for InDesign Server

Before addressing InDesign Server, let’s look briefly at what basic InDesign is.

InDesign is a desktop computer publishing software for both Windows and Mac OsX that helps in creating any type of document: catalogs, books, brochures, flyers, etc.

In brief, if you want to create and edit documents with typographic quality, you need InDesign. Typographic quality means that all major aspects of a document (font, colors, and spacing) are respected exactly as was intended by the designer, and it is very often required for print documents and professional PDFs. Very few applications (if any at all) offer the precision and reliability of InDesign. As such, for many years InDesign has been considered the de facto standard for creating professional documents.

Both InDesign Desktop and InDesign Server have many powerful features that can help in creating large documents:

A tool like InDesign offers so much precision. It is loaded with commands and options to customize and enrich a document as intended. Such complexity requires at least some training, and the editing of so many parameters in each element could require a lot of time. However, if you have to insert and update a lot of information in a document, doing this operation manually could cost too much time or cause mistakes.

To ease this workload, InDesign offers a way to use the software with scripting. In about the same way you write Excel Macro with VBA, with InDesign, you can give instructions through programming languages.

For example, instead of starting a new document by navigating with your mouse to File, New, Document, you can send that command to InDesign with file = app.documents.add()

From here, it is easy to start compounding long chains of tasks by creating and reusing script commands.

At Pagination, we are fixated with this method of using InDesign, and since 2009 we have helped our customers create their documents by writing in JavaScript to command InDesign Desktop and InDesign Server.

In particular, we recommend InDesign Server when the production of a document has to be fully automated to overcome both licensing and technical limitations.

Let’s break down the main advantages of InDesign Server when a complex document, heavy workload, fast delivery, and system integration are part of the workflow.

Still, there are also many technical nuisances that you can only partially work around in InDesign Desktop, nuisances that will put the long-term stability of your project at risk.

For example, on a desktop computer, the user needs a username to log into and start InDesign. At this time, InDesign provides certain alerts about updates or errors, and the user has to close them before letting JavaScript crunch the document. Noticeably, this all requires user intervention. However, there is an option to “shut up” InDesign with this instruction: UserInteractionLevels.NEVER_INTERACT;

Nevertheless, some alerts need to be handled manually, like when InDesign has to:

These occurrences halt the automation process in the desktop environment, even if UserInteractionLevels is set to NEVER_INTERACT. Additionally, it too often provides a vague description of the error, explaining encountered problems with a generic message such as “User canceled this action.”

It is possible to work around Adobe InDesign Desktop’s limitations with tools like scheduled tasks and operating system PowerShell script, but in the end, you will have used so much time for a patchwork that:

All of this often brings you back to your project’s square one, with so much time wasted learning non-scalable tricks.

So, to overcome these limitations and set a stable environment for serious document creation capacity, it is wise to use Adobe InDesign Server, as its layout, created by graphic designers, can be filled programmatically with data from other sources.

Publishing a product catalog or a price list could be a challenging task that can put pressure on even the best marketing teams. Learn with Pagination how to make a catalog with this complete guide.

You can use Pagination to automatically create beautiful documents in just a few seconds that are always ready for print or digital distribution. 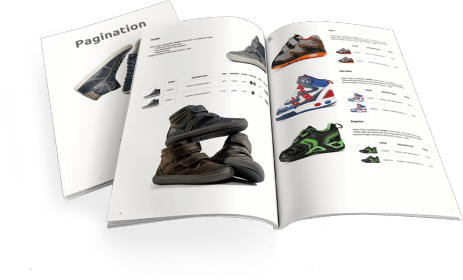 To make this site work properly, we sometimes place small data files called cookies on your device. By closing this banner, scrolling this page, clicking a link or continuing to browse otherwise, you agree to the use of cookies. Find out more.